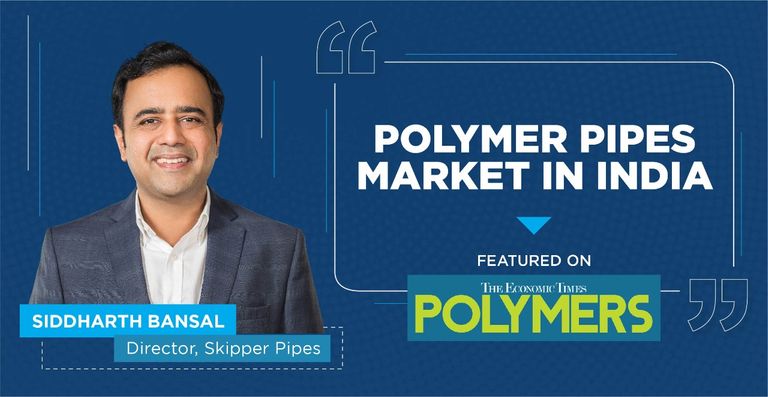 Polymer pipes are essentially plastic pipes, and they have been around since the early 20th century. However, around the mid-20th century, say post-1950s, polymer pipes under­went stronger development due to technological advancements and in­novations in pipe fittings and tech­nologies. Ever since polymer pipes have entered the global market, it has gradually transformed how our plumbing system is designed.

Polymer pipes quickly replaced metal pipes as they were more afford­able and corrosion-resistant. Today, polymer pipes are used for numer­ous purposes in a host of industries, which includes facilitating water supply to homes, irrigation, vacu­um and pressure systems, drainage and sewage systems, manufacture of advanced fire-sprinkler systems, infrastructure for the conveyance of chemicals, heating and cooling fluids, food products, and of many forms of gaseous or liquid fluids.

Although polymer pipes are most commonly known due to pol­yvinyl chloride (PVC) pipes, other forms of plastic pipes are available for specific purposes. For instance, acrylonitrile butadiene styrene poly­mer pipes conveyance for chemicals and slurries; polybutylene or PB-1 is used in pressure piping systems for hot and cold-water pressure; and so on.

In the new normal India, the poly­mer pipes sector has been doing rather good, despite the pandemic impact. A significant shift has hap­pened in demand for the metal to polymer pipes in various sectors, including plumbing and piping applications in the construction in­dustry. CPVC pipes are increasingly being used for hot and cold-water plumbing, and the sector has wit­nessed strong growth in the usage of these pipes.

The major players in the indus­try, who have the highest market capitalisation, have reported a year-on-year 3 to 11 per cent CAGR growth in the past two years. As per CRISIL, the PVC pipes makers are projected to make a record 35 per cent surge in FY2022. Globally, the pandemic has impacted the market of plastic pipes, which is estimated to be $29.9 billion in 2022. How­ever, considering market corrections due to the pandemic means the sec­tor would grow at a CAGR of 5.6 per cent by 2026, achieving a size of $38.1 billion.

In India, the plastic pipes industry is around Rs 400 billion. In the past five years, through the pandemic, it has scripted a 10 per cent CAGR from FY2016 to FY2021. The sector is projected to record a slightly higher growth rate of 12 per cent and achieve Rs 550-600 billion by FY 2025. The organised players in the sector account for approximately 67 per cent of the market in FY 2021.

Our country is amongst the biggest consumers of CPVC pipes and fit­tings products. Furthermore, under the visionary leadership of Prime Minister Narendra Modi, the gov­ernment has initiated “Har Ghar Jal Yojna” and “Jal Jeevan Mission”, in­tending to make tap water accessible to all rural households in India. One of the most significant steps taken by the government is the Jal Jeevan Mis­sion (JJM) initiative, which aims at providing tap water connections to all rural households by 2024.

With the growing need for clean water in all residential and commer­cial projects, the plumbing pipes and fitting product segment will witness stronger demand and growth. This has strongly pushed the demand for PVC pipes and fittings to support water flow in each home. The PVC and Fittings market was estimated to be around Rs 300 billion in FY2020. With a CAGR of 10.8%, the sec­tor could surpass Rs 500 billion by FY2025.

Pursuing the mission of Atmanirb­har Bharat, the Government policies are directed toward national devel­opment, which has self-reliance at its core. The government’s support of the sector will play an instrumen­tal role in its growth. While direct policies amplify the sector’s develop­ment, several indirect policies create growth avenues. The government has levied Anti-Dumping Duty on CPVC resin/compound imports from China and Korea from 2020 to 2025. This move is benefiting the lo­cal players directly.

The government has strongly focussed on designing various insti­tutional structures. It has boosted the efforts to monetise assets to achieve the National Infrastructure Pipeline (NIP) goals. Consequently, it has allocated capital expenditure of 5.5 trillion for FY2022. Several Government initiatives, which may not be directly related to the poly­mer pipes segment, are contributing to the sectoral growth in a big way. The Nation Monetization Pipeline is focused on strengthening infrastruc­ture in urban India.

There is a growing focus on rural infrastructure development, which is creating newer markets for polymer pipes. The expansion of railways, airports, roadways and highways, and the agricultural sector is creat­ing demand for polymer pipes in India. Another big growth accelera­tor focuses on reviving the affordable housing sector and urban planning. Other sectors adding to the demand include automotive, electrical and other end-use industries, oil and gas, and petrochemicals. The develop­mental focus of the Indian govern­ment has therefore presented the sector with a growth roadmap and numerous opportunities.

The polymer pipes market is not without its challenges. However, challenges provide opportunities for innovation, which further leads to trends. The following are some of the macroscopic challenges, oppor­tunities and likely trends which can impact the sector.

Global uncertainties. The world is facing several global uncertainties, including threats of climate change. For the past two years, the more ur­gent crisis has been the pandemic which has ravaged economies in waves. In India, post the third wave, the economy is at a full upswing. However, it is still premature to rule out a future wave that can affect value and supply chain, lead to container shortages, inflate the cost of crude oil, and affect international trade. The polymer pipes sector in FY2021 witnessed a strong rise in PVC prices due to these constraints and high demand for the product, and increased shortages. While this is unlikely to repeat, international geopolitics and conflicts have further disrupted industry, trade, and economies worldwide. Although the Indian polymer sector is largely protected, it may have some impact in the time to come. Any inflation in manufacturing costs will eventually get passed on to the customer.

India sources key raw materials for the polymer market from various countries. The majority of the raw materials are connected with the state of crude oil in the international market. While domestic petrochem­ical companies provide a significant share of raw materials to the indus­try, most products are sourced from countries like UAE, Saudi Arabia, Qatar, Korea, Taiwan, Japan, China and Europe. As we advance, India has a tremendous opportunity to create avenues for manufacturing raw materials in the country. Locali­sation will be a significant trend go­ing forward. We need to rethink our dependency on imports from other countries, considering volatile geo­political and economic situations for it to happen.

The poly­mer pipes sector is fragmented, with the lesser-known and smaller players sharing a significant part of the mar­ket. However, the players have a low propensity to endure, adapt, and up­grade against various uncertainties. This has led to some consolidation in the sector.

There is a grow­ing focus on minimising or abating lead usage for manufacturing polymer pipes. PVC pipes are the most com­mon sources of lead contamination in drinking water supplied to the home. Consequently, the government has mandated a BIS license from March 2022 (extended deadline) to control the quality of pipes and contain lead usage in the industry. It will further declutter the sector and will lead to higher consolidation. This is because smaller players would have to up­grade machinery, and product qual­ity, apply for and purchase licenses, and incur other capital expenditures, which will increase the cost of pro­duction drastically.

Use of Calcium and Zinc:

The industry will also switch to an in­creased usage of calcium and zinc instead of lead, reducing the effi­ciency of older machines by 15 to 20%. This will further require the players to upgrade their plant and machinery in the short term. The bigger players will continue to con­solidate and gain market share, while the smaller players will need Govern­ment support and incentives to stay in the competition.

The polymer pipes industry has strong growth drivers in various de­velopment sectors, including build­ing and construction, automotive, oil and gas, urban and rural plan­ning, etc. The industry has witnessed constant growth in the near past. By FY2018-2019, the Pipes Industry had achieved an estimated value of Rs 300 billion. Its sub-segments, fittings have over 20 per cent margins, fol­lowed by CPVC with 16-18 per cent and PVC plumbing range with 12-13 per cent.

With a 73 per cent share of the market, the PVC pipes and fittings segment is expected to grow during FY 2019-2026. It is anticipated that the sector will record a double-digit CAGR growth of 14 per cent by revenue. While the sector continues to become cleaner and greener in its design of products and addressing customers’ needs, the industry will continue to consolidate, and organ­ised players will gain a stronger mar­ket share.